This medal by Key is the only work I have seen that could be the No. 1 in
this series although the reverse reads "I.F. Wood Mem. Series".  An entry
in an 1894 Chapman Auction catalog (Catalog of the Collection of American
Medals Especially Rich in the Coins and Medals of Washington with a
Few United States and Foreign Coins of Isaac F. Wood, Esq, Rahway, N.J.)
reads "385  Norwalk, bust in military costume r., by Key; Norwalk Conn.
Memorial 1869.  R.  BOUGHT OF THE NORWAKE INDIANS, etc.  C. no. 1
punched in the reverse field.  I.F. Woods'  series c no. 1.  Very rare.  Reverse
die destroyed.  Silver.  Proof.  24." Lot 386 is the same in white metal. 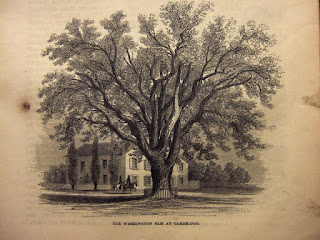 The Washington Elm at Cambridge from "American Historical Trees",
Harper's New Monthly Magazine, May, 1862. The popular legend has George
Washington assuming command of the American Army under this tree
on July 3, 1775 although there is no reliable documentation this
actually happened and it is now considered a myth. The tree survived
until 1923 but as two city workers were removing limbs from the
diseased tree it fell onto it's iron fence and the cable of the Boston Elevated railway.

Second Obverse
Baker 412, silver, 27.6mm
The Martha Washington image was also used by George H. on
the reverse of baker 413, The 100th Year Of Our Independence
Medal.

Baker 412B, white metal, 27.87mm
St. John's Guild, established in 1866 and incorporated in 1877,
was a nonsectarian organization concerned with the treatment
of sick children, especially the poor. The floating hospital was
a specially equipped barge that would make six trips per week
to the Lower Bay stopping at piers and landings to admit and
treat children at no charge. The trip would end at the Guild's
Seaside Hospital in New Dorp, Staten Island where the more
severely ill would be admitted to their 300 bed hospital. 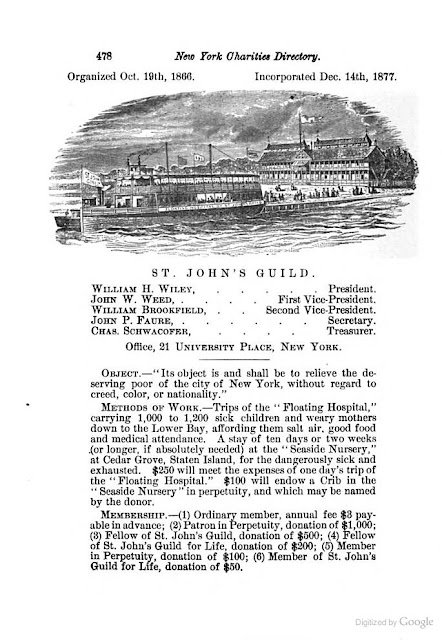