Frederick Philipse (1626-1702) acquired a one-third interest in the
Yonkers Plantation in 1672, eventually owning the entire estate. A
Royal Charter granted on June 12, 1693 in the name of William and Mary
elevates his possessions  "into a Lordship or Manor of Philipsborough in free and common soccage according to the tenure of our Manor of East Greenwich within our County of Kent in our realm of England, yielding, rendering and paying therefor, yearly and every year, on the feast day of the Annunciation of the Blessed Virgin Mary, at our fort at New York, unto us, our heirs and successors, the annual rent of £4 12 s. current money of our said Province." Frederick was instrumental in the founding of the city of Yonkers and the manor house was the first substantial
building built in the city

There seems to be no first hand information as to when the building was erected; the
earliest reference to the date is in Lossing's "The Hudson From the Wilderness To The Sea"
(1866) in which he says "The older portion was built in 1682. The present front, forming an addition, was erected in 1745 when old Castle Philipse at Sleepy Hollow was abandoned."

On November 28, 1776 over 200 colonial New Yorkers signed the Loyalist
"Declaration of Dependence", among them was Frederick Philipse III, the third
and last Lord of the Manor. Ordered to be arrested by George Washington he
fled to England and his lands were seized by the New York State Legislature.
There were several owners until 1872 when it became the first City Hall of Yonkers.
Acquired by the State of New York in 1908 it is now the Philipse Hall
State Historic Site. 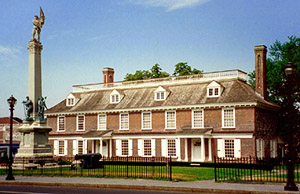 GW-847, Baker 639A, white metal, 28.3mm
Neil Musante calls this the 2nd obverse but does not have
a first obverse listed.

This is listed as the 3rd obverse by Musante.

This combination is not listed in Baker. The white metal one pictured
in Medallic Washington is from the Massachusetts Historical
Society collection; the listing says "copper - not seen but highly
likely"

The obverse and reverse of these medals seem to have no connection
and I think it is because they don't! Below is a medal Issac F. Woods had
George H. engrave and strike for the wedding of his friend Edward Parsons.
Sometime after the engraver decided to simply produce medals
combining the Parson's die with several of his existing Washington dies.